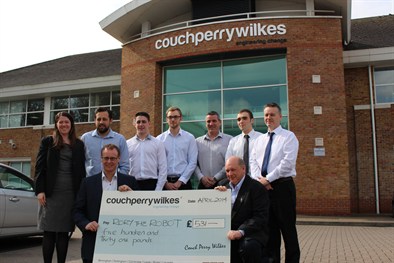 Employees at Solihull-based Couch Perry Wilkes have raised a magnificent £531 for Rory the Robot.

The 130 employees raised £231 during a series of dress-down Fridays while mechanical engineer, Aidan McSharry raised £300.

Each month Couch Perry Wilkes’ employees suggest which good cause their dress down Friday money should go to and Aidan had no hesitation in suggesting Rory the Robot.

“I was diagnosed with prostate cancer and had an operation to remove my prostate last January.  I’ve now been given the all clear.  I know how important a robot like this is and I wanted to do my bit to help,” said Aidan, who lives in Bromsgrove.

Richard Wilson, associate director of Couch Perry Wilkes said : “We have been running dress down Fridays for two years and in that time have raised more than £4,600 for good causes, most of them local.  We are delighted that we have been able to support the Rory the Robot appeal.”

The Rory the Robot campaign aims to raise £1.6million to buy the machine which will be based at the Alexandra Hospital, which is the county’s centre of excellence for urology.

Prostate cancer claims the life of one man every hour and by 2030 will be the most common cancer. In Worcestershire alone there are 2500 men surviving prostate cancer at any one time, with about 450 to 550 new prostate cancer cases diagnosed every year.

The technology will allow surgeons to remove tumours with more precision through five cuts around the prostate gland rather than open surgery. It means less blood loss, less pain after surgery, a lower risk of complications and recovery times will fall from up to 12 weeks to between three to four weeks. It was first developed by the US military to allow surgeons based in America to operate remotely on soldiers injured on the battlefield over the internet, but has since been developed for use in general hospitals. It can also be used for head and neck cancer, colorectal and heart surgery.

You can donate to the Rory the Robot Campaign online at www.justgiving.com/rorytherobot, by texting RORY 97 + £amount to 70070.