Studley Fish Bar chips in £730 for Rory the Robot 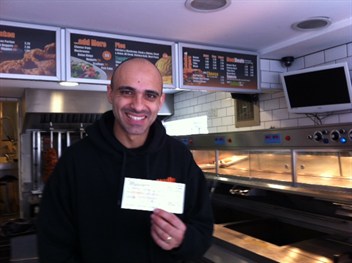 Studley Fish Bar has raised an amazing £730 for Rory the Robot.

The popular fish and chip shop donated 50p from every portion of chips bought on Good Friday and ran a raffle to raise money for the appeal.

Owner, Theo Makris said: “My father had prostate cancer and I wanted to do something to help other people with the disease.

“I’d like to thank my customers for supporting the Rory appeal.”

The Rory the Robot campaign aims to raise £1.6million to buy the machine which will be based at the Alexandra Hospital, which is the county’s centre of excellence for urology.

Prostate cancer claims the life of one man every hour and by 2030 will be the most common cancer. In Worcestershire alone there are 2500 men surviving prostate cancer at any one time, with about 450 to 550 new prostate cancer cases diagnosed every year.

You can donate to the Rory the Robot Campaign online at www.justgiving.com/rorytherobot, by texting RORY97 + £amount to 70070 or fill in the form in this week's Standard.