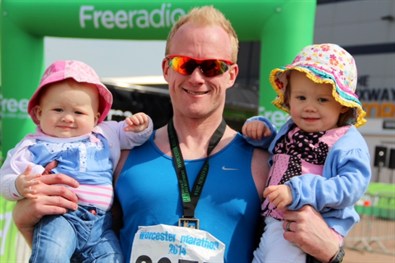 On Sunday 4 May, Graham Edwards ran the Worcester marathon to raise money for the children’s clinic at Worcestershire Royal Hospital.

Graham and his wife Em are frequent visitors to the children’s clinic, as both their young daughters suffer from a very rare blood disorder, Pyruvate Kinase Deficiency (PKD). Only around 12 people in the Midlands have PKD, a genetic disorder that affects red blood cells.

Both two year old Amelia and nine month old Mabel need constant monitoring and support from staff in the children’s clinic. The girls will need blood transfusions for the rest of their lives.

The Edwards family previous raised £1,600 for the clinic in 2013, in thanks for the excellent care their eldest daughter Amelia received at just five weeks old.

Graham said: “Our eldest little girl had a rough start in life, spending a stressful four days in intensive care just 12 hours after coming into this world. Unsure what caused her severe jaundice and low blood count; she underwent a series of blood tests.

“Now our latest addition to the family, Mabel Lily, has PKD and she too is a little fighter.

“At all times the staff in the children’s clinic have been so reassuring and helpful to us. They have really helped us through a lot of traumatic times.”

So far Graham has raised over £500 for the clinic. In order to raise even more Graham, along with some of his colleagues from his work Adecco Recruitment, as part of a global event, he is going to cycle five mountain stages that form part of the professional bike race the Tour de France in the Pyrenees and an Ironman later this year. Graham has previously completed a half Ironman but this will be a new greater challenge!

Charlotte Hughes, senior staff nurse on the children’s clinic said: “We are so very grateful for all the lovely donations that the Edwards family have already contributed.

“We could not believe that Graham was taking on an even bigger challenge and wanted to support us further. It really does make a big difference to you. If children or young people are comfortable in the environment, then they will feel more relaxed and confident in coming to see us in children’s clinic.

“We very much appreciate all that the Edwards family have done and do for us!”