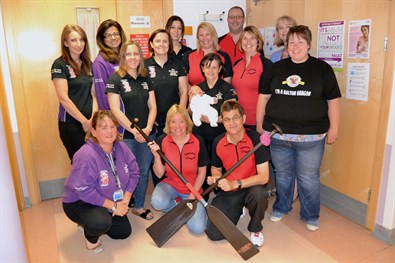 Among the 29 crews of dragon-boaters racing along the River Severn this Sunday 8 June, will be a team of 15 midwives from Worcestershire Royal Hospital.

The Worcester Bolton Dragons have been dragon-boating since 2012, in memory of their friend and colleague Lorraine Bolton. Since starting their racing careers, the midwives have raised £3000 for the hospital’s cardiac catheter suite, where Lorraine was treated.

Every year the Worcester Dragons, who helped train the midwives, host a charity regatta ‘Race the Dragon’ and have chosen to donate this year’s proceeds to the midwives’ cause.

Craig Cliff, Race the Dragon co-ordinator and WDBRC said: “Our annual dragon boat regatta is a fun event to raise money for charity. The aim is to get local teams involved and active.

“When our coach Nigel Leigh had a heart attack in 2012, he was treated very well by the cardiology department at Worcestershire Royal Hospital. We’re very pleased to be supporting this charity.”

Midwife and Bolton Dragon Sharon Sarkar passed on the team’s thanks on to the WDBRC. She said: “We would love for people to come down and support us and the many teams taking place in this event.”

On the day there will also be opportunities to have a go on the dragon boat training machine, a BBQ and other stands.

For more information about the Race the Dragon regatta, visit www.worcester-dragons.org.uk/get-involved/race-the-dragon.