Worcester Golf and Country Club raise £1,570 for Rory the Robot 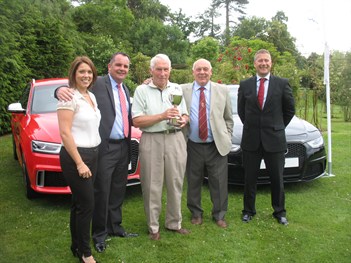 Worcester Golf and Country Club have raised £1,570 for Rory the Robot.

The club held a seniors’ charity cup day and the members turned out in large numbers in support of the £1.6million appeal for a new surgical robot for Worcestershire.

The winner from 71 players was Robin Lowe who received the trophy from Phil Bligh, Head of Business at Audi Worcester, who were the main sponsors of the day.

Andrew Grant conducted an auction of a Day at the House of Lords and the House of Commons gifted by Lord Faulkner, together with a bottle of champagne fresh from the vineyards of France, donated by Paul West.

Robin commented that his win was totally unexpected but all the sweeter for that reason.

Phil Bligh said:  “Audi are very pleased to be able to support the Rory the Robot Appeal, particularly because it is a local appeal giving direct benefit to the citizens of Worcestershire”

David Simms, Captain of the Seniors, was delighted with the day and commented: “Prostate cancer surgery is clearly of interest to males of a certain age and I am so pleased so many members of the club helped us make this substantial contribution of £1,500 to this very worthwhile appeal.”

The Rory the Robot campaign aims to raise £1.6million to buy the surgical machine which will be based at the Alexandra Hospital, which is the county’s centre of excellence for urology.

You can donate to the Rory the Robot Campaign online at www.justgiving.com/rorytherobot, or by texting RORY97 + £amount to 70070 .  Don’t forget to share your fundraising efforts on Facebook and Twitter using the hashtag #rorytherobot.