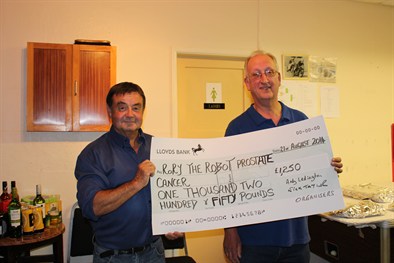 Malvern and District Motorcycle and Light Van Club has raised £1,250 for Rory the Robot.

The club decided to give the proceeds of this year’s summer charity skittles tournament to the Rory appeal after one of their members was treated for prostate cancer at the Alexandra Hospital in Redditch.

Club chairman, Andy Ledington said: “We decided to help knock down prostate cancer one skittle at a time.  We like to support local causes and Rory the Robot appealed to us because we have a lot of members who could potentially benefit from him at some point.”

Thirty teams from Malvern and the surrounding towns and villages took part in the competition which was held over several months.  The winners were  the Powick Nomads who beat The Sausage Men in a sizzling final at the club’s headquarters in Malvern.

Nick Taylor, the club’s vice chairman, said everyone had benefited from supporting Rory the Robot.  “The charity has benefited because we have raised money for it and the players have benefited from finding out more about prostate cancer.  I would like to thank everyone who took part in the competition and all their supporters

The Rory the Robot campaign aims to raise £1.6million to buy the surgical machine which will be based at the Alexandra Hospital, which is the county’s centre of excellence for urology.

You can donate to the Rory the Robot Campaign online at www.justgiving.com/rorytherobot, or by texting RORY97 + £amount to 70070.  Don’t forget to share your fundraising efforts on Facebook and Twitter using the hashtag #rorytherobot.