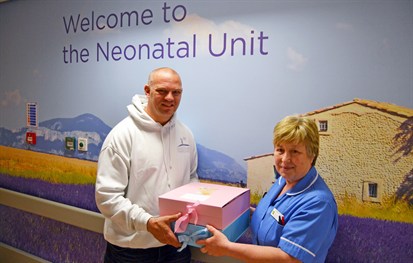 A Worcestershire man has donated a set of memory boxes to neonatal units at Worcestershire Acute Hospitals NHS Trust for parents who have suffered the loss of a child.

The specially made keepsake boxes include some baby blankets, a fleece, teddies, forget-me-not flowers, little angel candles, and a sleeve for a lock of hair among other things.

The donation came from Richard Atkinson, who donated the boxes on behalf of Baby Ava’s Support Foundation, a charity they set up following the tragic loss of his child, Ava, who was born prematurely at the Alexandra Hospital, Redditch.

The idea to make their own memory boxes came from their experience at the Alexandra Hospital after being given a keepsake box by the neonatal unit to remember Ava by.

Richard Atkinson, founder of the foundation, who delivered the boxes in person said: “We were given a memory box at the Alexandra Hospital where we were able to keep memories of Ava.

“These memories are now there for us to look back at and have helped us so much that we decided we wanted to put together our own memory boxes for other parents who have suffered the loss of a child.”

Staff Nurse, Rita Jenkins who received the boxes said: “It’s terribly sad when anyone loses a child, but unfortunately it does happen. These boxes will provide a great comfort for other parents going through what the Atkinson’s have been through. It’s a fantastic gesture.”

Richard plans on continuing his fundraising for Baby Ava’s Support Foundation so that it can keep supplying the memory boxes to neonatal units. The next fundraiser is a charity boxing event on Friday 24 July.

Richard and six friends will also be riding 1267 miles in 14 days from Spain to Redditch in July 2016 to raise money for the charity.

If you want to find out more, help with fundraising or donate to Baby Ava’s Support Foundation, visit their JustGiving page at: www.justgiving.com/baby-ava/

Or if you’re feeling inspired to fundraise for your local hospital, call the fundraising team on 01905 760551 or email This email address is being protected from spambots. You need JavaScript enabled to view it..