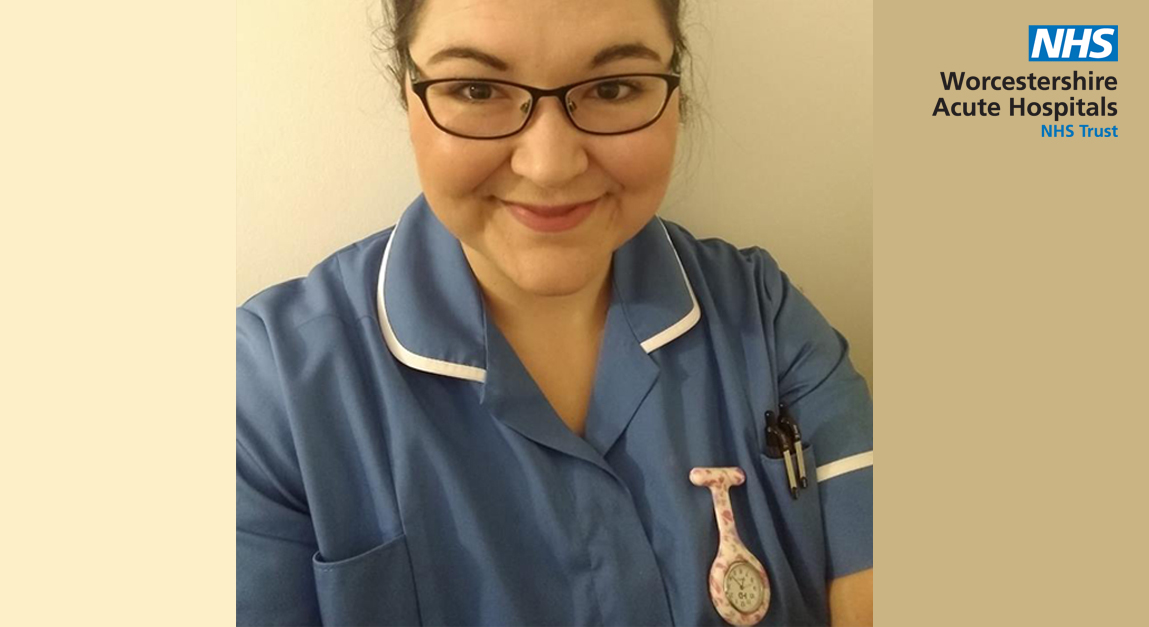 A newly-qualified nurse who suffers from a serious and long-term health condition has landed her dream job in Accident and Emergency (A&E) at Worcestershire Royal Hospital after being inspired to join the team by the treatment she has received in the department.

Laura Parsons, 26, from Worcester, started work as a Staff Nurse in A&E at Worcestershire Royal earlier this month, having recently qualified at the University of Birmingham.

Laura has a rare and complicated condition which causes a number of ongoing health problems including problems with digestion, unstable joints and abnormal heart rhythms.

Her condition means that Laura’s health can quickly deteriorate and leave her needing urgent emergency hospital treatment. This has led to many visits to the A&E department at Worcestershire Royal where she is treated and stabilised before being admitted to a ward for ongoing care.

“I’m prone to abnormal heart rhythms that have led to me being cared for in the Emergency Department and then onward in Medical High Care multiple times”, Laura explained.

It was these experiences in A&E and High Care wards at Worcestershire Royal which convinced Laura she wanted to become an Emergency Department nurse.

“I was always interested in healthcare but initially went to University to train as a teacher. I became miserable during my teacher training and as my health deteriorated I had to quit my course”, said Laura.

After a period of improved health, Laura decided to make the leap into healthcare and started working as a Health Care Assistant (HCA) in Brighton where she lived before moving to Worcester.

During her time working as an HCA, Laura improved her confidence and her colleagues persuaded her that she should take the leap and train to become a fully qualified nurse. After moving to Worcester, Laura was accepted on to a nursing degree course at the University of Birmingham.

Throughout her nurse training, Laura had to come to A&E at Worcester on a number of occasions and became known to the staff in the department. It was here, receiving dedicated care from the Emergency team that she decided to apply to work directly alongside the nursing staff who had cared for her so many times.

“The nurses in A&E all knew I was doing my training and were so supportive and encouraging. They reassured me that it didn't matter to them that I would be their patient sometimes and that it shouldn't be a barrier to me joining the team”, Laura said.

After applying and coming along to an interview day at Worcestershire Royal, Laura was offered her dream job working in the department and hospital that continue to care for her.

“I’m so grateful to be able to be part of a team that empower me to achieve my dreams in spite of my disability. Five years ago, I was too sick to work and honestly wasn't sure how my life would turn out, but now I'm working in my dream job, surrounded by a supportive team”, said Laura.

“I will never be "well", I have symptoms every day and hospital admissions will probably always be a part of my life, but when I am ill, it's amazing to be cared for by a hospital that supports me to pursue the career I adore and allow me to live a fulfilling life in a job I love”, Laura explained.

“Being both a patient and a nurse gives me a unique insight into what matters to patients, and the illness I’ve had has definitely influenced how I nurse for the better”, Laura added.