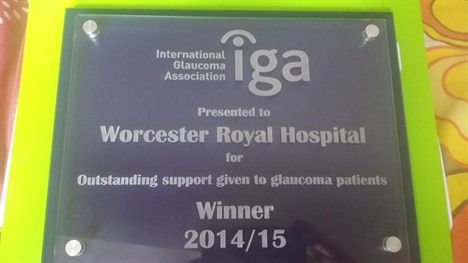 The eye department at Worcestershire Royal Hospital has received a national award for the service it delivers to patients.

The ophthalmology team at Worcestershire Acute Hospitals NHS Trust were recognised in the International Glaucoma Association (IGA) annual awards as ‘best glaucoma ophthalmic unit in the United Kingdom’ in a ceremony last week.

The IGA chose Worcestershire Royal Hospital as their winner after nominations from both patients and from the IGA regional managers who visit hospital eye departments across the country.

Lead Consultant for Ophthalmology, Tarun Sharma attended the presentation to receive the award on behalf of the department. At the ceremony the award was presented on a plaque with the words, ‘for outstanding support given to glaucoma patients’.

Mr Sharma set up the glaucoma service in Worcestershire in 2008 as previously Worcestershire patients had needed to travel to Birmingham for complex glaucoma surgery. A year later in 2009 the team set up the Worcestershire Glaucoma Support group. The unit at Worcestershire Royal Hospital provides state-of-the-art glaucoma and cataract surgical interventions and is recognised nationally and internationally for its high quality outcomes.

A website for the support group has recently been set up which provides glaucoma education to people through online videos which can be watched in their home in the company of their family members and carer. Worcestershire is the only county in whole of UK to have such a website and it has proved extremely successful and popular with patients.

Mr Sharma said: “We are very proud to receive this award from the IGA and are thrilled to hear that positive patient feedback was the reason we were nominated. We have put patients at the centre of their care and so it is pleasing to receive this recognition from them.”

Russell Young, Chief Executive of the IGA said: “Worcestershire Royal Hospital is a worthy award winner. It has demonstrated how staff and patients can work together to both raise public awareness of glaucoma and educate patients about their condition. The glaucoma support group is consistently well attended, which is largely driven by the sustained effort on behalf of all of the staff.”