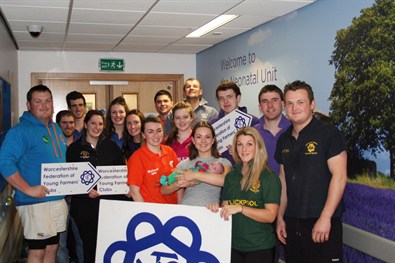 A group of eager and dedicated members from the Worcestershire Federation of Young Farmers’ Clubs are preparing to complete a 160 mile run to Torquay from their County Office in Hawford, Worcester in order to raise money for two very worthy causes.

The team of 20 will be running in groups of three in a rolling 5km relay over 160 miles along the A38 from Hawford, Worcester to the seaside town of Torquay at the end of April this year. This will mean that over the three days it takes to complete the run, each member will have completed a marathon (26 miles) by the time they reach Torquay.

The Worcestershire Young Farmers will be raising money for Cancer Research UK and the Neonatal Intensive Care Unit at Worcestershire Royal Hospital. Matt Tomkins, the County Chairman of the Worcestershire Federation of Young Farmers’ club, who will be leading his team in this challenge said that training had been going well in the run up to the challenge and that there was a great atmosphere throughout the team.

When asked why the federation had chosen to donate to the two causes, it was clear that Cancer Research UK and the Neonatal ICU at Worcestershire Royal Hospital held significant places in the hearts of not only Matt, but also those joining him on the run.

Matt went on to explain: “It didn’t take us very long to decide which causes/charities we wanted to support this year. The Neonatal Unit at Worcestershire Royal Hospital helped support a couple who have supported not only their local Young Farmers’ club but also the County Federation for many years.

“Sue and Mark Symonds had their world turned upside down with the very early arrival of their son, young Thomas at just 29 weeks in November last year. The support they received from the unit and all the hard work from the staff there helped them through a very difficult time, and we are so pleased that Thomas is doing so well now.

“Young Farmers is just as much about helping other charities, despite us being a registered charity ourselves, we are thrilled to be able to give something back to the local community.”

Jane Righton, one of the runners, also expressed her thanks to the unit, which helped her with the premature birth of her twins, Evie and Olivia. Weighing in at just 2lb and 3lb Jane said that she couldn’t thank the unit enough for all of their hard work to help the girls get strong enough to go home and for the continued support she and her family obtained from the staff there.

Cancer Research UK was also a significant charity to the group. Matt revealed that: “I lost a close friend a few years ago to cancer. It was a very sad time for his family and friends, as well as his local club, Upton YFC. He was a much loved character and was thought of highly by his peers. I have been waiting for an opportunity to do something big for the charity, and now seems like the perfect opportunity.”

There are many similar stories throughout the group of runners that have links to the charity. Many of the members had lost a family member or friend as well as people within the Young Farmers community, even a member aged just 13 years old. Some have friends and family currently fighting the disease which effects 1 in 3 people. ‘The sooner we can get rid of this disease, the better’.

So, how can you help? Well, the run will be taking place between the 22 – 24 April 2015, but they require lots of help and support in the meantime. Would your business like to sponsor the group? There are various packages to suit all budgets. Maybe you would like to make a personal donation? Whichever you prefer, the group would be extremely grateful for your support. They are hoping to raise as much money as possible to help both of their causes.

Matt went on to finish by saying “All of our runners have worked extremely hard to prepare for the run and also to help with the fundraising side of it too. Young Farmers is not just a youth organisation, when you join, you become part of a family that will follow you throughout your life if you want it to. We want to give something back to causes that mean a lot to us, that have helped support our friends and family in their hour of need, of which we are ever thankful for. We cannot complete our goal without the help of others, so please help us as much as you can, no matter how big or small. Every little helps. Thank you.”

You can donate to the causes at www.virginmoneygiving.com/runninondownthea38 and follow the group’s progress on Twitter @WFYFC_Challenge or at www.worcsyfc.org.uk.