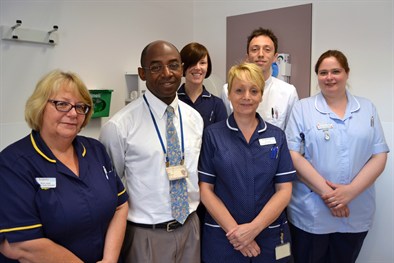 Specialist doctors and nurses at Worcestershire Acute Hospitals NHS Trust are looking for patients to take part in a clinical trial aiming to improve how leg ulcers are treated.

The EVRA (early venous reflux ablation) trial compares early treatment of leg ulcers to delayed treatment. The trial aims to improve how ulcers heal, which could lead to a better quality of life for patients.

A leg ulcer is a wound on the leg below the knee that fails to heal.

Sarah Holloway, Vascular Research Nurse said “Venous leg ulcers can develop after a minor injury, and fail to heal due to underlying problems such as varicose veins, where persistently high pressure in the veins of the legs has damaged the skin.

“It is estimated that 1 in 50 people over the age of 80 in the UK has a leg ulcer. This means that 1 per cent of the population will have a leg ulcer at some point in their lives, with the risk increasing with age.

“Most venous leg ulcers will heal within three to four months if they are treated by a healthcare professional trained in compression therapy for leg ulcers. However, some ulcers may take longer to heal, and a very small number never heal.

“By taking part in this national trial, you can help us find better ways of treating leg ulcers and make them much easier to manage in the future.”

Symptoms of venous leg ulcers include pain, itching and swelling in the affected leg. There may also be discoloured or hardened skin around the ulcer, and the wound may produce a distressing odour.

Over 200 patients across the UK are taking part in the trial. Vascular teams across the country are looking for another 300 before the trial finishes in January 2016.

If you or someone you know has had a leg ulcer for between six weeks and six months, contact your GP and ask to be referred to the hospital EVRA trial.

This project is sponsored by Imperial College London and was funded by the National Institute for Health Research (NIHR HTA) Programme (project number 11/129/197). The views and opinions expressed therein are those of the authors and do not necessarily reflect those of the HTA, NIHR, NHS or the Department of Health.