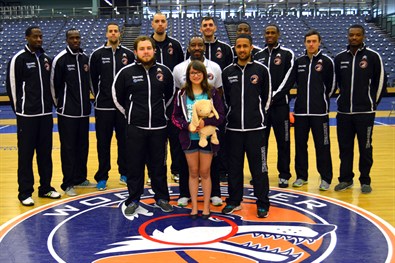 Wolves sensationally won the game 88 - 81 against the Eagles who have only lost three times this season, with all of these defeats being at the hands of the Worcester Wolves.

As part of the evening the University of Worcester and Worcester Wolves showed their support to the Riverbank children’s ward at Worcestershire Royal Hospital.

The University of Worcester, who own the Worcester Wolves, chose the ward and Worcestershire Acute Hospitals NHS Trust Charitable Fund as their nominated charity of the year for 2015.

A total of £392 was raised on the night from various fundraising activities including a raffle to win a signed Worcester Wolves jersey, halftime collections and a guess the name of the Easter Bunny competition.

The Easter Bunny competition was won by former Riverbank patient, 11-year-old Daisy, with her guess ‘Cottontail’.

Wolves supporter and Daisy’s mum Teresa Woodman, from Ross-On-Wye,said “It’s fantastic to see the Wolves supporting a cause so close to our own hearts. Daisy has been partially deaf since birth and the staff on the children’s ward have always been so kind and caring to us. Daisy loves her new bunny too!”

Craig said “We’re delighted that the Worcester Wolves are playing such an active part in fundraising for Riverbank children’s ward.

“These donations are all going towards improvements to a sensory room on the ward which will help children, particularly those with learning difficulties, while they are in hospital. We are also looking to purchase some ‘buddy beds’ which will allow parents and family members to stay on the ward overnight with their children.”

Wolves Managing Director Mick Donovan said “The University of Worcester and the Wolves are proud to be able to support the Riverbank ward. The University community has a strong tradition for supporting local charities in recent years and it was great to see the Wolves fans also giving so generously on what was also a great night of basketball.”

The team were also continuing their on-going ‘Rebound Challenge’ where local businesses are donating £1 for every rebound the team makes during games. So far the challenge has raised over £400 with the team hoping to reach £1,000 by the end of the season.

If you would like to get involved and help support the Riverbank children’s ward or Worcestershire Acute Hospitals NHS Trust Charitable Fund please contact the fundraising team on 01905 760 551 or email This email address is being protected from spambots. You need JavaScript enabled to view it..