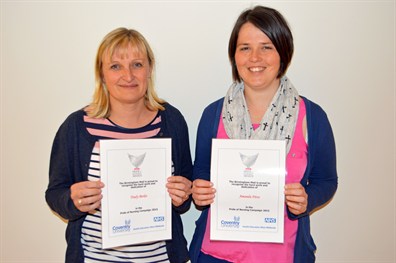 Two Worcestershire midwives have been recognised for the outstanding care and dedication they have shown to patients in the Birmingham Mail’s inaugural Pride of Nursing Awards.

Amanda Fitze, midwife; and Trudy Berlet, bereavement support midwife; received their awards in a ceremony at the REP Theatre in Birmingham after being nominated for their support and care of a bereaved family whose baby sadly died after birth.

Amanda and Trudy who both work at Worcestershire Acute Hospitals NHS Trust, were recognised at the Pride of Nursing Awards which celebrates nurses and midwives throughout the West Midlands who go the extra mile to deliver compassionate, patient-centred care.

Both midwives were nominated by the family they cared for who contacted the Birmingham Mail themselves to praise their work. Their nomination said, ‘Trudy and Amanda made a sad situation more bearable, nothing was a rush, it was so calm, they demonstrated incredible compassion in their work and their care has been on-going.’

Trudy Berlet said: “Both Amanda and I feel really privileged to have supported the family and honoured that they took the time to nominate us for the award whilst grieving for the loss of their baby.”

For more information about the Birmingham Mail’s Pride of Nursing Awards, visit www.birminghammail.co.uk/news/midlands-news/pride-nursing-awards-tell-your-8732489