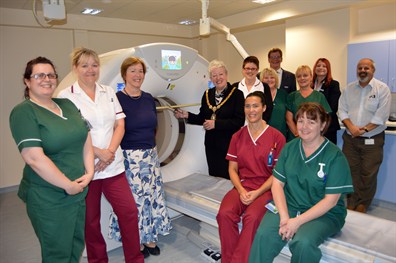 The Mayor, who is also a longstanding volunteer at the hospital’s Macmillan Centre, was met by members of the radiology team and representatives from Toshiba Medical Systems, on Thursday 25 June, who showed her the new technology and explained the benefits the equipment would have for staff and patients.

The additional CT scanner has been installed at hospital following an increase in demand for its imaging services.

Scans on the new machine started earlier in June, with the radiology team keen to get patients in and experiencing the new technology.

Cllr Pattie Hill said “I am absolutely delighted to open this new scanner. It’s a great asset to our local hospital and its patients.”

Chief Radiographer David Hill said “It’s absolutely fantastic that we now have this second scanner. It will make such a difference to our staff and our patients. It will allow us to see even more patients and reduce the length of time they have to wait for a scan.”

The state-of-the-art Toshiba Aquilion Prime scanner is running alongside the existing CT scanner at the hospital, allowing radiology staff to work more efficiently while increasing the number of patients they can see and meeting their diagnostic targets. The scanner also includes an animated screen which displays visuals and tips for nervous patients and children, which will help reduce any stress from the diagnostic test.

CT scans are used to create images of the inside of the body and are more detailed than standard x-rays. Both CT scanners offer patients the highest standard of scanning with the lowest dose of radiation possible.

Toshiba Medical Systems Account Manager for the West Midlands, Barnaby Harrison said “We are proud to support this new Toshiba Prime CT scanner installed this Spring. Its unique PureVision detector reduces the dose patient’s receive, whilst clearing the image further for radiology staff. The scanner is also zero carbon for its lifetime.”

Over the last 12 months over 57,500 CT scans have been performed across the county by staff at Worcestershire Acute Hospitals NHS Trust, an increase from 54,900 the previous year.