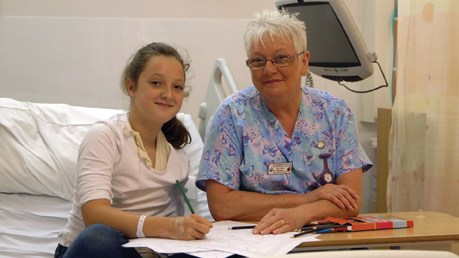 Children, young people, parents and carers have scored the county’s acute hospital services above average in a recent survey.

The Care Quality Commission (CQC) report found that children’s wards and day case units at the Alexandra, Kidderminster and Worcestershire Royal hospitals, scored higher than the national average on the availability and listening nature of staff and explaining what would happen during operations or procedures, among other areas.

Children and young people rated their overall experience of care as 8.6 out of 10, with parents and carers rating the care 8.7 out of 10. Parents and carers also gave the trust the highest score in the country for providing hot drinks for them during their time in hospital, scoring the service 9.9 out of 10.

Dana Picken, Matron for children’s services across the county said “It’s fantastic to hear that our patients and their parents or carers are finding the care we provide to the children and young people of Worcestershire and beyond to be so positive.

“It’s great to see both parents and carers, and children and young people, have a say in the results of this survey, and it’s clear to see where their opinions differ when it comes to hospital food. Parents and carers rated their child’s enjoyment of hospital food as 7.7 out of ten, the highest score in the country, while children and young people gave the food just 5.5 out of 10, among the national average. We will be working with our catering and ward teams to see how we can improve meal and snacktime experiences for our patients, while still pleasing their parents and carers.

“There are a few other areas where we would like to see our scores beat the national average, and we are currently working with families to see where we can further improve our services.”