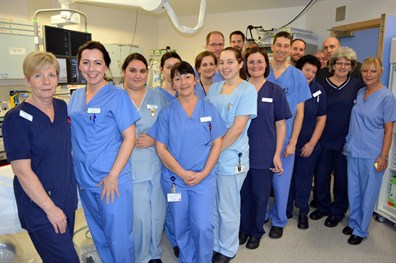 A complex heart procedure undertaken by the cardiology team at Worcestershire Acute Hospitals Trust has been filmed and streamed live to a nationwide conference in London, to showcase best practice.

Worcestershire Royal Hospital was one of only four hospitals nationally that were asked to participate in the Advanced Cardiology Intervention Conference.

The procedure was filmed by two remote controlled cameras in the lab - one on the ceiling and one on the IV drip - and streamed live to the conference and watched by more than 500 attendees.

Four consultants took part in the filming, with two performing the procedure in the morning, and two for the afternoon session. Nurses, radiographers and cardiac physiologists were also involved.

The procedure, which is routine for the department, was an angioplasty which aims to open up narrowed or blocked arteries as a result of angina or a heart attack.

At the end of the conference the team were voted second best of all the cases demonstrated during the week.

Lead Cardiologist, Dr Jasper Trevelyan said: “The decision to choose Worcestershire Royal Hospital as an example is a great endorsement of the work we have been doing here. This is the first non-surgery cardiac centre to be asked to demonstrate its work. It was a great honour and a big step for us to take part in the conference, but the positive feedback and comments we have received have been fantastic.”

Divisional Medical Director, Dr Anthony Scriven said: “It was exciting for us to take part in this filming, as this conference is one of the major UK and international cardiology meetings and this is the first time a unit like this has been asked to do this.

“For the past 20 years the live case demos have always been from big tertiary centres, so for us it is an amazing achievement with recognition internationally.”