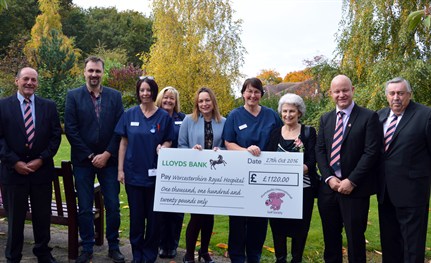 A local golf club has donated over a thousand pounds to a ward at Worcestershire Royal Hospital in memory of one of its members who was cared for on the unit.

The Portobello International Golf Society, known as 'the PIGS', presented the Intensive Critical Care Unit (ICCU) with a cheque for £1120 which the PIGS raised by hosting a charity golf tournament.

The club supported the family of former member Ian Morrison, to raise the funds for the ward in appreciation of the fantastic care he received, as well as the support that staff on the unit offered the family of Mr Morrison before he sadly passed away earlier this year.

Relatives of Mr Morrison and PIGS committee members attended the hospital last week to present the cheque to ward staff and thank them in person for the care and support they offered Ian and the family.

The money donated to the ICCU will be used to provide improved facilities for families and visitors to the unit.

Sarah Bird, Ian Morrison’s daughter, said: “We really wanted to come in and thank the team involved in my dad’s care in person. They all made it so peaceful and respectful; we knew that he was in safe hands. We’re so thankful for the great care they gave dad and we just want the team to know how much we valued it.”

Stephanie Beasley, Divisional Director of Nursing for the ward said: “We really appreciate any donation and to be able to go back to the ward and tell everyone about this is brilliant. Getting feedback from families is so important and it means so much to us to hear positive comments from the family of a patient.”