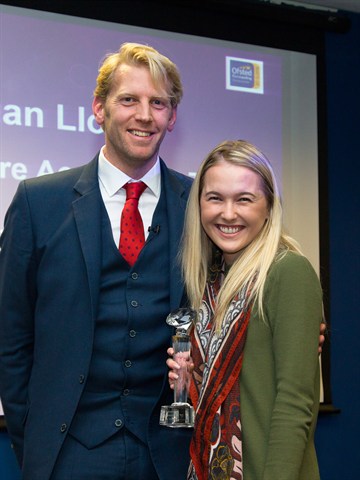 Twenty eight Business Admin Apprentices from Worcestershire Acute Hospitals NHS Trust were acknowledged for their work over the past year in the special awards ceremony.

The Herefordshire and Worcestershire Group Training Associate held their annual awards in November, recognising the hard work and successes of apprentices from across the region. The awards ceremony took place at Sixways Stadium, Worcester with the winners receiving their awards from Olympic Gold Medal winning rower and MBE, Andrew Triggs-Hodge.

Megan Lloyd, an apprentice who works in the Ophthalmology and Rheumatology departments at both the Worcestershire Royal and Kidderminster Hospitals, won the 'Commerce Apprentice of the Year' for her fantastic work over the past 12 months.

Megan said: “I have really enjoyed the past year working in the Rheumatology and Ophthalmology departments at Worcestershire Royal Hospital and Kidderminster Treatment Centre. It has given me a chance to expand my skills and learn new ones and I am honoured to have been given this award.”

Congratulations to all the apprentices who were recognised. Each individual has made significant steps to develop themselves on a personal level alongside their professional development.

Apprenticeships in focus: A case study with Megan Lloyd

After leaving Sixth Form, Megan decided University was not right for her but knew she wanted to continue her education. After looking into apprenticeships, Megan found the NHS business administration apprenticeship and decided to apply.

From her first day Megan said she felt a part of the team, being welcomed in to the role which gave her opportunities in a variety of tasks, including reception duties, booking patients in, answering the telephone and other administrative tasks.

After completing her Level 2 apprenticeship, Megan felt that she wanted more experience so decided to take up the Level 3 apprenticeship. Now, after 18 months in the NHS her on the job training has given Megan a great deal of experience and transferable workplace skills that have led her to be recognised regionally with an award for her conscientious attitude and fantastic improvement.

Megan said: “I now work between Worcestershire Royal Hospital and Kidderminster Treatment Centre in the Rheumatology and Ophthalmology departments where I take on a variety of job roles and responsibilities. I thoroughly enjoy being able to work and gain a qualification at the same time.

Caroline Edwards, Deputy Head of Learning and Development at the Trust said: “Apprenticeships can provide great alternative routes into a variety of careers across all sectors and none more so than in the healthcare sector. There are a whole host of fantastic opportunities out there where apprentices can earn, learn and achieve a nationally recognised qualification at the same time.

“In the last year we’ve supported more than 100 different apprenticeship placements including a mixture of new start apprenticeships and step up programmes to upskill existing members of staff.”

Megan added: “By doing an apprenticeship you are gaining experience within a work place, something my friends at university may not experience until later on.

“My apprenticeship has enabled me to grow as a person and gain qualifications that without the apprenticeship I don’t believe I would have achieved. Choosing to do an apprenticeship was certainly the best decision for me!”

If you’re interested in applying for an apprenticeship at Worcestershire Acute Hospitals NHS Trust, please email: This email address is being protected from spambots. You need JavaScript enabled to view it.