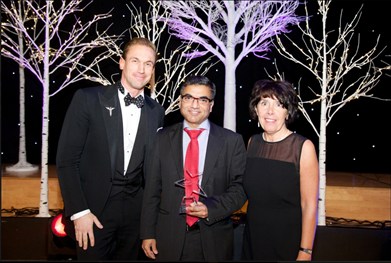 A Worcestershire doctor has been recognised as the Development Champion of the Year in NHS regional awards.

Mr Tarun Sharma, Consultant Ophthalmologist, received the award earlier this month at a ceremony in Birmingham.

Nominated by his colleagues at Worcestershire Acute Hospitals NHS Trust, Mr Sharma won the award because of his efforts in setting up the county’s first glaucoma support group and securing extra funding to enhance treatment for patients with eye conditions. .

Having already achieved a Manager of the Year award for his role as Clinical Director of Ophthalmology in Worcestershire’s hospitals, and also securing a runners’ up prize for his department in the national Health Service Journal Awards in London; Mr Sharma’s team say he has gone above and beyond the call of duty.

Mr Salman Mirza, Consultant Ophthalmologist at Worcestershire Acute Hospitals NHS Trust said: “During Mr Sharma’s time in Ophthalmology, the department has seen many positive changes as well as innovative ideas being implemented. He has overseen the huge success of the nurse practitioners role in our unit.

“His work setting up support groups and securing funding for the department has motivated staff in the department to perform even better. Mr Sharma thoroughly deserves the recognition of these awards.”

Mr Sharma said: “I am delighted to receive this award, I was not aware of these awards and I only learnt about them when I was shortlisted as a finalist.

“I am happy that my work has not only improved the financial viability of ophthalmology department but is also enhancing the reputation of the trust and its management at a national level.”

Mr Sharma was presented his award by television personality Dr Christian Jessen in a ceremony earlier this month at Birmingham Town Hall.

All of the regional winners of the NHS Leadership Awards, including Mr Sharma will now be finalists at the national award ceremony in March.