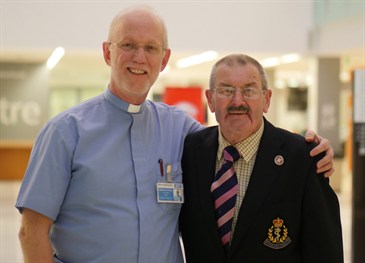 A local fundraiser and health campaigner has been recognised with a British Citizen Award for services to healthcare after giving years of support and fundraising for diabetes causes in Worcestershire.

Fred Holland, from Kidderminster, will be presented with a British Citizen Award (BCA) at Westminster Palace in a ceremony later this month. In 2012, the Diabetes Centre at Kidderminster Hospital was renamed the Fred Holland Centre for Diabetes in honour of the awareness and fundraising work he had done.

The British Citizen Awards (BCAs) were launched to recognise exceptional individuals who work tirelessly and selflessly to make a positive impact on society. BCAs are awarded twice annually, and recognise ‘everyday’ people whose achievements may otherwise by overlooked.

Fred estimated that he has raised up to £2million for good causes over the last 58 years and is now a diabetes champion with Worcestershire Acute Hospitals NHS Trust which runs the Kidderminster Hospital and Treatment Centre.

Fred was nominated for his BCA by Rev. Guy Hewlett, Chaplain at Kidderminster Hospital, who said: “Fred is an absolute marvel. He never stops and is someone who is focused, kind, compassionate and really wants to make a difference to people’s lives. He’s an incredible chap, he’s incredibly inspiring and is really deserving of this award.”

After hearing of his nomination, Fred said: “I’ve never been given anything like this before, it’s really amazing. I feel it’s my dedication in life to help others and to help save lives by improving diabetes awareness and care.

“I reckon I must have raised close to £2 million over the years for various causes. At Kidderminster we now have what I believe is some of the best diabetes care and facilities in the world.

“I turned 80 in September, and I’m always busy, but I’ve got no intention of slowing down just yet.”

Fred, aged 80, became aware of the need for greater diabetes awareness in 1971, when his daughter, Vivienne, was diagnosed with type 1 diabetes. He formed the Wyre Forest branch of the British Diabetic Association in the same year and has continued to be its chairman ever since.

Fred’s services to diabetes care received international recognised in 2014 when he became the first British person to receive an award from the International Diabetes Federation. His award was noted by the then Prime Minister, David Cameron, who wrote to him telling him it was an ‘amazing achievement’ and that Fred was ‘an inspiration to others’.