A kind-hearted local runner has donated nearly £700 to the children’s ward at Worcestershire Royal Hospital after fundraising by running the Worcester Half Marathon. 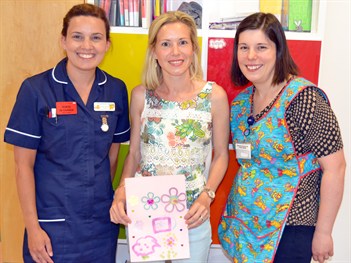 Annie Bird, from Claines, decided to run the Worcester Half Marathon in May to raise funds for the Riverbank children’s ward to give something back after her two young children were treated on the ward.

The donation of £673 will be used to purchase toys for the youngest patients on the ward as well as going towards sensory toys to benefit children with learning disabilities.

Annie Bird said: “I decided to run the half marathon as a challenge, but thought it would be a good opportunity to give something back to a good cause.

“As my two children have both been treated here on the ward, and everyone here has been so wonderful I thought it would be a good place to donate to. It’s also a bonus to see for myself where the money goes!”

Children’s play specialist on Riverbank Ward, Charlotte Hamflett said: “It’s a huge achievement to complete a half marathon and it’s amazing that Annie has decided to donate this money from it to the children’s ward.

“We’re so grateful for every donation and this money will make a real difference to our youngest patients and children with learning disabilities.”